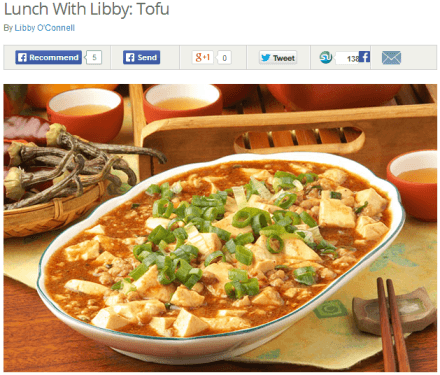 30 Jul A History Of Tofu & Its Role In Chinese Food

The History Of Tofu In Chinese Food

While otherwise considered simple and non-spectacular in its base form, tofu when skillfully cooked is an integral part of some of the well-known best Chinese food in San Francisco and elsewhere in the world. History Channel historian Dr. Libby O’Connell favors eating tofu herself and has something to say about the origins of the versatile ingredient:

Tofu has a long, impressive history in China. As early as 1600 B.C., the ancient Chinese cultivated soy beans, which remain a vital source of protein and other nutrients throughout Asia today. During the Han Dynasty (between 206 B.C. and 220 A.D., about the same time as the Roman Empire’s glory days), the Chinese production of bean curd became widespread.

How exactly tofu was discovered and first cultivated isn’t known, but there is one existing legend that explains how. According to the tale, tofu was accidentally invented when a cook decided to make flavored soybeans using a substance called nagari. However, the cook ended up with bean curd instead of the flavored soy beans. Back then, the Chinese named it doufu, and was already a local meal staple as early as 100 A.D.

The subsequent visit of Japanese priests during the Nara era (710-794 A.D.) to study Buddhism in China gave way to the delicacy being given its modern name. The priests brought the Chinese doufu with them back home to include it in their vegetarian diet. A Shinto priest by the name of Nakaomi was credited with the first mention of the name “tofu,” which was regularly used as an altar offering back in the day.

Fast forward to the age of exploration and modern tofu history. Tofu first found its way into Western consciousness when the Spanish explorer Domingo Fernandez de Navarrete personally saw how tofu was made. He documented the process in his book A Collection of Voyages and Travels, which was published in English in 1704. The popularity of tofu reached French shores and was first produced in France around 1880. 15 years later, tofu was introduced to Americans for the first time by Hirata & Co, which then led to the first-ever mass production of tofu by T.A. Van Gundy and his La Sierra Industries in California back in 1929.

Today, tofu is widely considered an integral part of authentic Chinese cuisine and various other Asian dishes. Restaurants like the Bay Area’s Chili House SF offer some of the best Chinese food in San Francisco with tofu as a central ingredient. As it turns out, eating tofu fills a hungry tummy; while learning the history of tofu provides a direct look into the evolution of Asian cuisine.