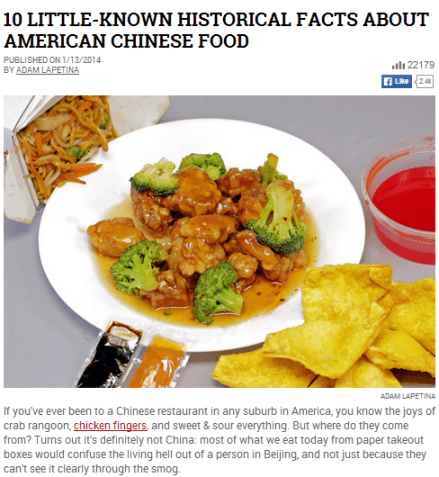 There is no doubt of the love Americans have for Chinese food. There too is great debate about what is the best Chinese food to order from menus that often feature dozens of dishes. However, many people may be wondering how all this love started. Thrillist.com writer Adam Lapetina offers some insight into the growth of Chinese food in the United States:

It started in California
The foundations for what we know as Chinese food were laid in the mid-1800s, when a huge influx of Chinese immigrants came to California during the Gold Rush, mostly from Canton (today known as Guangzhou). The newcomers started opening restaurants, and eventually began settling elsewhere thanks to the railroad expansion. That resulted in the establishment of Chinatowns all over the place (never forget, Jack Nicholson!).

In San Francisco, where the biggest Chinatown outside Asia is located, one can throw a stone and hit a Chinese restaurant. However, individuals with discriminating palates shouldn’t settle for anything less, especially if they are out to celebrate a special occasion like a birthday or wedding anniversary. They should go for the gold, and specifically look for the following delectable staples in their menu. Here is some of the best food to order from Chinese restaurants:

Chinese cuisine would simply be incomplete without this staple. After all, it is considered to be one of China’s national foods. This dish is a favorite because of its thin and crispy skin that covers mouthwatering meat. People can further savor the scrumptious meat strips with a variety of sauces like sweet or sour, plum, or hoisin sauce, a popular Chinese dipping sauce.

While this dish’s origin is a frequent topic for debate— some records say it’s an original Sichuan dish, some say it’s from the Guizhou province—it remains to be among the most popular Chinese cuisine staples. The addition of peanuts or cashews to the roasted chicken is a definite enhancer, taking its yumminess up a notch. Vegetarians who don’t want to partake in meat, though, have alternatives to enjoy from established restaurants like Chili House SF, including Kung Pao tofu and Kung Pao prawns.

What’s Chinese cuisine without these two elements? Noodles come in a variety of composition: bean thread, egg, and rice stick. Meanwhile, dumplings come in various fillings, including mince pork, ground chicken, and beef for the meat-loving population, and diced shrimp and vegetables for the vegetarians.

For those marking a momentous occasion soon, consider serving Chinese cuisine for the guests. However, they should keep in mind that the best Chinese food in San Francisco consists of the above staples. Get those chopsticks ready!