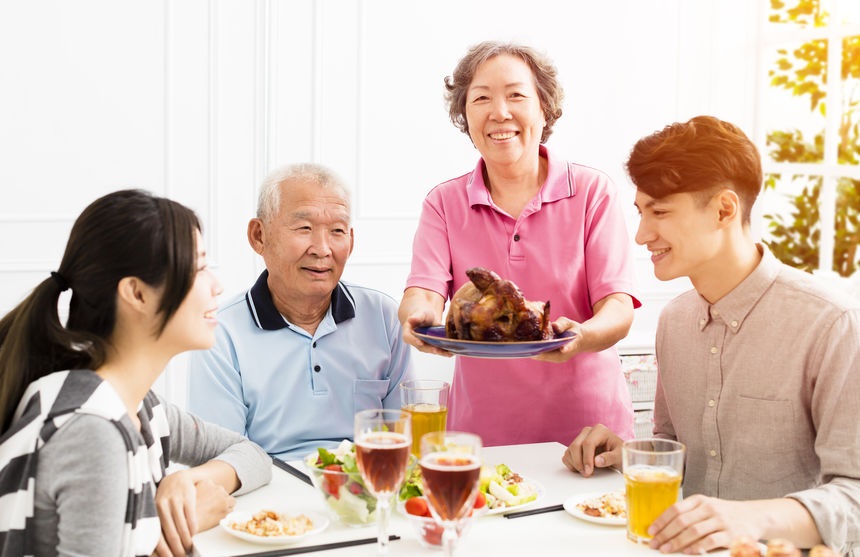 Holidays could be a lonely time for the first Chinese immigrants to the San Francisco Bay Area in the 1870s. Not only were the missing loved ones thousands of miles away, the holiday traditions themselves were like nothing the Chinese immigrants had experienced back home. This prompted many to develop traditions of their own that they passed on through the generations. Nearly 150 years later, some Chinese Americans embrace their dual cultures by incorporating traditions of both countries into their Thanksgiving celebrations.

Making Thanksgiving Their Own

In an effort to fit in and do things the American way, some Chinese families found themselves eating bland turkey, potatoes, and stuffing on Thanksgiving Day that bore no resemblance to the traditional foods they knew and loved. This caused some Chinese to dread Thanksgiving. It wasn’t that they weren’t grateful for the opportunities they had in America, they just couldn’t enjoy food that was so different from what they ate on a day-to-day basis. Many families began to put their own cultural twist on Thanksgiving after realizing that they just couldn’t keep eating food they found so unpleasant.

One idea to make the Thanksgiving turkey more palatable to Asian families is to glaze it with Teriyaki sauce and stuff it with rice. Adding a lot of garlic and butter to mashed potatoes made them taste more like they came from the home country as well. Others swap out the turkey entirely for a the historically significant Peking Duck instead. Some other possibilities for a more “Chinese” twist on Thanksgiving include:

While some Chinese American families enjoy the same combination of dishes from both cultures every year, others found that they liked to continually expand their Thanksgiving day meal. For example, one Chinese immigrant who has called the United States home since 1982 started out with a more traditional American meal of turkey and fixing and evolved to his current recipe:

As the popularity of Thanksgiving grows, some Chinese locals have chosen to celebrate it in their birth country. Similar to the United States, natives of China often put their own twist on the foods they choose to serve and even the name of Thanksgiving itself. In some Chinese provinces, people refer to the holiday associated with giving thanks as Friendsgiving as they gather to celebrate love and friendship.

The Best Local Restaurant To Celebrate Thanksgiving With A Chinese Flavor

As an award-winning Chinese restaurant popular with natives of San Francisco and tourists alike, Chili House is open 24 hours a day and seven days a week. This includes Thanksgiving. With the American holiday just a few weeks away, now is the perfect time to make alternative plans to celebrate it without having to spend days cooking and preparing to serve guests. Instead of the traditional turkey dinner eaten by millions of Americans, those who want to stay close to their Asian roots can enjoy a feast of Peking duck and other dishes served family style and in generous portions.Click here to view our Peking Duck Banquet menu

Chili House San Francisco has catered to large family groups for years. The staff loves to celebrate family and community and looks forward to preparing a Chinese Thanksgiving to remember for guests this 2019 holiday season.