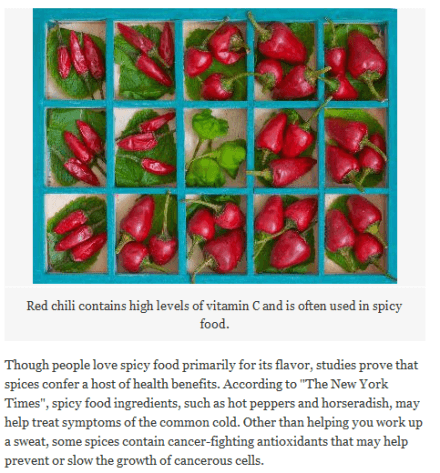 When you choose to have Chinese food catering services from restaurants like Chili House SF for a special occasion, you must already expect that at least one or a few of the dishes to be served are on the spicy side, especially if it’s Szechuan cuisine, which is known for the liberal use of chili peppers and spices. Then again, if you don’t have a sensitive palate and actually love the slow yet satisfying burn of chili oil and whole peppercorns, you’re in for a delectable meal—and a number of health benefits.

Capsaicin is the active compound present in chili peppers that is responsible for the hot or burning sensation you feel as you munch on spicy food. This compound increases your body temperature and heart rate, thereby boosting your metabolism (by as much as 8 percent) and helping you burn more calories. Moreover, a spicy meal encourages people to eat and be satisfied with smaller portions, which means less calorie intake.

Good for the Heart

Studies revealed that people in certain countries that eat the most spicy foods have much lower incidence of stroke and heart attack. Once again, capsaicin saves the day. A study published by the American Chemical Society showed that capsaicin helps reduce the buildup of LDL (bad cholesterol) while increasing blood flow; thus, improving cardiac function.

As you dip dim sum from San Francisco restaurants in chili sauce, place it in your mouth, and slowly savor its flavors as you chew, you’re also taking in anti-cancer compounds. In fact, chili peppers with their capsaicin aren’t the only spices that are lauded for their cancer prevention properties. An article by Robert Hughes posted at SFGate states that:

Some spicy foods have anti-cancer potential. Turmeric, a peppery-flavored spice native to India, contains the active antioxidant curcumin, which has shown some anti-cancer effects in lab studies. Though small studies have shown positive results, according to the Mayo Clinic, curcumin requires further investigation before being used for cancer treatment. The American Cancer Society suggests that capsaicin may help slow the growth of prostate cancer cells.

From keeping you fit to aiding your body in fighting off the most dreaded disease, the benefits of spicy food can’t be ignored. On the other hand, if chili peppers aren’t your spice of choice, you can always rely on the mild yet gratifying heat of other spices, which are also used in Chinese cuisine, such as garlic, ginger, star anise, and cloves, to name a few.

(Source: What Are the Health Benefits of Spicy Food?, SFGate)