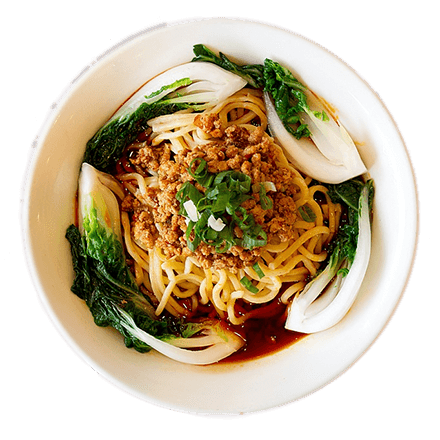 Some people love Chinese food based on their Americanized perception of the cuisine. Favorites might include Chop suey, General Tso’s chicken, and Mongolian beef. Yet, those who crave authentic Chinese fare understand that the real dishes coming from mainland China often are both simpler in composition and have a much more powerful kick. One such dish that is incredibly popular is called Dan Dan Noodles.

If you enjoy Chinese Sichuan cuisine, you won’t want to miss Dan Dan Noodles. These famous spicy noodles received their name from the way in which they have been cooked and served in China.

“Dan Dan” refers to the type of carrying pole that street vendors would use to sell the dishes to pedestrians. The pole was carried on the shoulders of the vendor with two baskets on either side, one carrying the noodles and the other with the sauce. The name translates to “noodles carried on a pole.”

The most famous Dan Dan noodles are probably from a peddler named Chen Baobao in Zigong . His noodles gained notoriety because he carried them everywhere so that people could try them, and he used a two-celled pot to cook the dish. Today, they continue to be known as both tasty and spicy traditional Chinese cuisine.

What Are Dan Dan Noodles?

Dan Dan noodles themselves are made by rolling dough into noodles, although many recipes allow you to purchase and use dried Chinese egg noodles for the dish. While the noodles are an important ingredient, it’s the sauce and the remainder of the toppings that gives the dish its authentic spicy flavor.

If you order Dan Dan noodles in the United States, it’s possible that you could get an Americanized version of this classic dish. In some restaurants, the spice is removed and replaced with sweetness. In others, sesame paste or peanut butter is sometimes added to the recipe.

Traditionally, Dan Dan noodles were considered a popular snack, so they weren’t served up as meal-sized dishes. In most places, they still aren’t. Most authentic Chinese chefs recommend that you serve Dan Dan noodles in smaller bowls. This is because the dish is best enjoyed hot, both spicy and at a higher temperature. Smaller servings allow diners to enjoy this special dish while the steam floats off of the surface and the topping remain crispy.

“Absolutely must get: Dan dan mien. The main reason I keep coming back here is for this dish. It’s hands down the best version of these noodles I’ve ever had and something I’ve introduced many friends to.” Jonathan Y., San Francisco