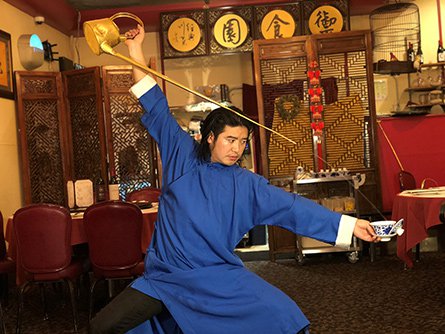 Posted at 15:08h in General, Uncategorized by Admin 0 Comments
0 Likes

Over the next few weeks, Chili House SF invites you to take a deep dive into authentic Chinese culture and experience one of the most unique and mesmerizing performances in the world, as we graciously host renowned artist Xumin Liu , master of Gong Fu (or “Kung Fu”) tea and Bian Lian, or “face swapping”.

Kung Fu Tea is a traditional form of tea brewing that quite literally translates to “making tea with skill”, traces its roots all the back to the 3 rd century. The overall process, which puts heavy emphasis on quality ingredients, water chemistry, and temperature, helps to bring out and improve the flavors and aroma of the tea, heightening the drinker’s experience.

Liu’s accompanies his performance by serving his tea with complex and acrobatic pours, utilizing long spouted copper teakettles. As Liu has noted, the use of the teakettles goes far beyond the shear spectacle. The resulting pour from the special kettle helps unlock the flavors upon the pour , further heightening the experience.

Bian Lain , or “face swapping” is an ancient dramatic Chinese art and staple of operas in the Sichuan province. Performers in ornate masks and costumes will conduct choreographed moves and dances, all while swapping the color and style of the mask they are wearing at what appears to be fractions of a second. The techniques utilized by the true Bian Lain masters are as heavily guarded as American magicians secrets, with stories of actors offering tens of thousands of dollars to learn the secrets behind the art .

Xumin Liu, a native of the Sichuan province, began studying and practicing the art of Gong Fu tea in his early 20’s, while under the wing of known tea master Shifu Chen. Liu complemented these skills by training in the martial art of Wushu at a Taoist monastery on the Quigcheng Mountian. His background in martial arts helps give his Gong Fu performances an added level of fluidity and athleticism, capturing the awe of all who come to see him (including world famous California chef Alice Waters ).

About ten years ago, famed face-swapping artist Shimen Lu took one of Liu’s Gong Fu performances in Korea and immediately recognized his natural talent and presence. That performance lead to Lu offering to take Liu under his wing and teach him the coveted art of face swapping. After years of practice, Liu includes a face-swapping aspect into all his dinner shows, rounding out a truly magical performance.

Liu will be gracing our diners with his one-of-a-kind performances over the next eight weeks, giving you ample time to come plan an excursion out to the our Inner Richmond location to take in a once in a lifetime dining experience. As we want all of our diners to be able to take in one of Liu’s shows, we suggest calling ahead to ensure Liu will be performing during your visit.

We hope to see you there, you will not want to miss it!