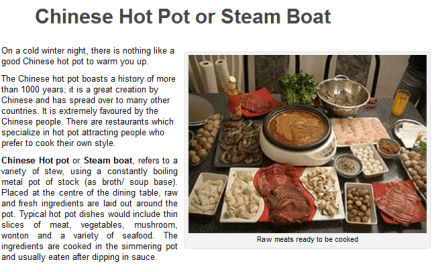 For most people, dining at Chinese restaurants in San Francisco , such as Chili House SF, often equates to ordering the more well-known (and widely loved) items on the menu: chow mein, dumplings, kung pao chicken, and sweet and sour pork. However, if there’s one type of dish on the menu that Chinese cuisine lovers must try—which can be succinctly described as “satisfying, hot goodness”—it’s the hot pot.

Sometimes referred to as steam boat or Chinese fondue, hot pot is a kind of stew that is traditionally served in a metal or clay pot of boiling broth/soup base. The pot is placed at the center of the dining table as plates or bowls of fresh and raw ingredients, including thin slices of meat, vegetables, and seafood, are laid out around it. Diners cook the ingredients they prefer by placing them into the simmering pot, and then dipping the cooked meat or vegetable in a tasty sauce.

History: Beginnings of the Boiling Broth

It’s been said that the Chinese hot pot boasts a history of more than a thousand years. An article posted at CultureofChinese.com has this to say about hot pot history:

The hot pot originated from the Mongolians and first appeared in China early Qing Dynasty. It became popular after Manchu army passed the Shanghai Pass in 1644.

Early in the 18th century of China, during the reign of Emperor Kangxi and Qianlong, Hot Pot was already featured upon their royal cruisine [ sic ]. Hot Pot later also became popular in Muslim restaurants.

1854, Zhengyang Restaurant was opened outside Qianmen in Beijing. This became the first Han restaurant with Hot Pot. The restaurant was renowned and exceptionally famous for its mutton being sliced as thin as paper.

Hotpot today has become widely popular in most of China.

Hot Pot In San Francisco And Beyond

As a matter of fact, hot pots are not just in China anymore. Thanks to authentic Chinese restaurants in San Francisco and other places, people from all over are able to enjoy this delicious and heartwarming dish. A bite into the tender, freshly cooked meat and a sip of the warm, savory broth are sure to lift one’s spirits—especially on a cold, rainy day.

If you’re ordering a hot pot to share with friends, ask your companions if there’s any food in the pot that they wish to scoop out before you throw in the long-cooking ingredients (e.g. clams, abalone, prawn). Moreover, you wouldn’t want soggy vegetables or tough meat, so make sure that you don’t overcook them. Thinly sliced meat, for one, cooks within 20-30 seconds. You should take it out when there’s no more pinkness left in the meat.

If you’d like to try the best hot pot in San Francisco, visit Chili House SF, where we pride ourselves on serving authentic cuisine. Our chefs have served many foreign dignitaries and even sitting presidents of China in their careers. Try our hot pot today!