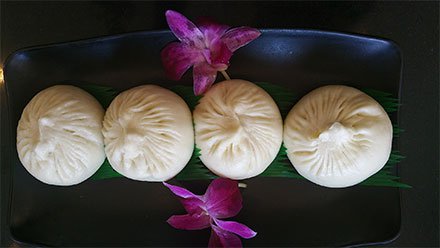 Posted at 21:11h in General, Uncategorized by Admin 0 Comments
0 Likes

A quality of any great restaurant is a love and respect for traditional dishes and recipes. Those recipes, weather followed to a tee or used as inspiration for a new dish, can help restaurants use their menus to tell whatever stories they want. At Chili House, we are proud to announce a new addition to our menu: the Gou Bui Li bun, a fiercely popular dish and a culinary staple in the Tianjin.

A Baozi bun is a steamed bun that can be filled with a variety of different meats and vegetables. As portable as they are delicious, bouzi buns are often enjoyed in restaurants and as a take away street food. There are two different versions of the baozi bun; the Xiabao, (or small bun) which are generally served in restaurants three to ten to a plate, or the Dabao (or big bun), the preferred version of most street vendors. According to some accounts, the famed scholar and military strategist Zhuge Liang invented the baozi bun during the Three Kingdoms period.

Over the years as the popularity of the dish grew leaps and bounds, different names and variations of the dish began to pop up and reflect how the steamed buns made their mark in various regions of China. One area particularly fond of baozi buns is Tianjin, where they are known as Goubuli Baozi. The story goes that the dish was introduced by a man named Gao Guiyou, whose nickname growing up was Gou Zi (translating to “baby dog”). As an adult he started selling the baozi buns for a living, and they got so popular in Tianjin that he could not be bothered to talk to customers while he worked. Locals started calling his buns “gou bu li baozi”, literally translating to “stuffed bun that dogs are not interested in”.

The term Gou bu li became so synonymous with the food in Tianjin that locals don’t call it anything else (think how everyone call facial tissue “Kleenex” here in America). In fact, the name is lent to one of the Tianjin’s oldest and most established food brands. Goubuli was founded in 1858 and continues to produce baozi buns in the same vain as Gao did. While seniority has been on their side, sales over the years have dwindled and the company has been looking for ways to expand their reach globally. Last year they signed a deal for rights to Gloria Jean’s Coffee’s , an American coffee chain. The deal is said to have opened the doors to Goubuli establishing the Goubuli baozi as a perfect pairing with coffee.

A combination of traditional ingredients and the unique styles and flavors of our chefs, the Goubuli buns we will be serving at Chili House will truly be the best of both worlds. Don’t be surprised if San Francisco becomes the newest destination for Goubuli Baozi!