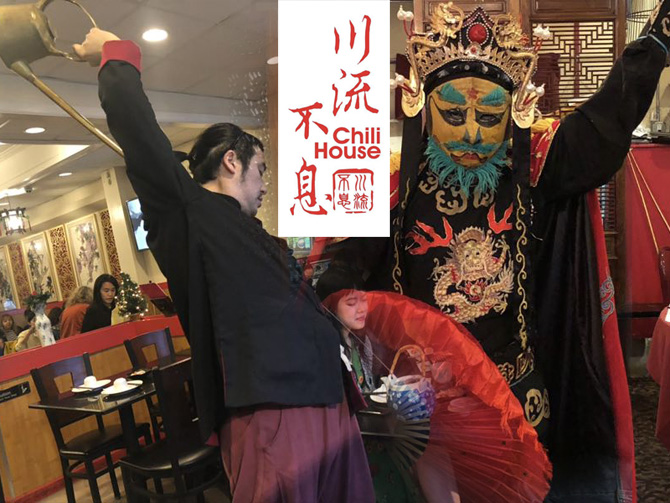 Posted at 15:06h in Uncategorized by Admin 0 Comments
0 Likes

The event celebrated not only the craziest, most inspired, and delicious noodle creations and Asian-inspired food fusions, but also the upcoming official grand opening of Esports Arena Oakland. The skills of some of the best chefs and gamers in the Bay Area were on display.

Chili House and Z & Y Restaurant showcased our hand-pulled noodles at the event. The special noodle-coated sauce filled the mouth with waves of taste, beginning with a slightly sweet tang that was followed by a smack of satisfying, spicy hot burn.

Kung Fu Tea master Xumin Liu, who has been performing at Chili House since January also dazzled the crowds at the event. His Kung Fu Tea performances were a very popular attraction drawing appreciative audiences.

A Wall of Noodles

Noods Noods Noods Oakland was presented by Foodbeast and NISSIN, The Original Cup Noodles, the 46-year-old company that helped make instant noodles a mainstream dish. A noodle lover on the way in knew they were in the right place when they were greeted at the entrance by the impressive Tower o’ Cup Noodles display.

Inside, the outdoor noodle festival had two sections: the Marketplace with visiting food trucks from all over the Bay Area, and the all-you-can-eat (AYCE) section showcasing unique drool-worthy dishes from Bay Area restaurants. There were so many noodly and other types of Asian dishes that no one could come close to sampling everything on offer.

The idea of founders Paul Ward and Tyler Endres, Esports arenas are designed to fill a niche need for gamers. Traditionally, playing video games has been a solitary pursuit, even when playing online with others. Esports arenas are places where a player can share their gaming passion with like-minded fans.

At Noods Noods Noods Oakland, players could compete in the Super Smash Bros. Melee and Smash 4 singles tournaments with $5,000 in cash prizes. And of course, when they become hungry, there was no shortage of food.

Noods Noods Noods Oakland provided the perfect opportunity to try some of the exclusive dishes and premiere food items from the Bay Area’s best restaurants. In a city with no limit on Asian food options, Chili House SF stands out. Chefs Han has earned international acclaim for serving both Sichaun and Beijing cuisine since 1988. Check us out online or call (415) 691-4599 to experience delicious and authentic Chinese dining.