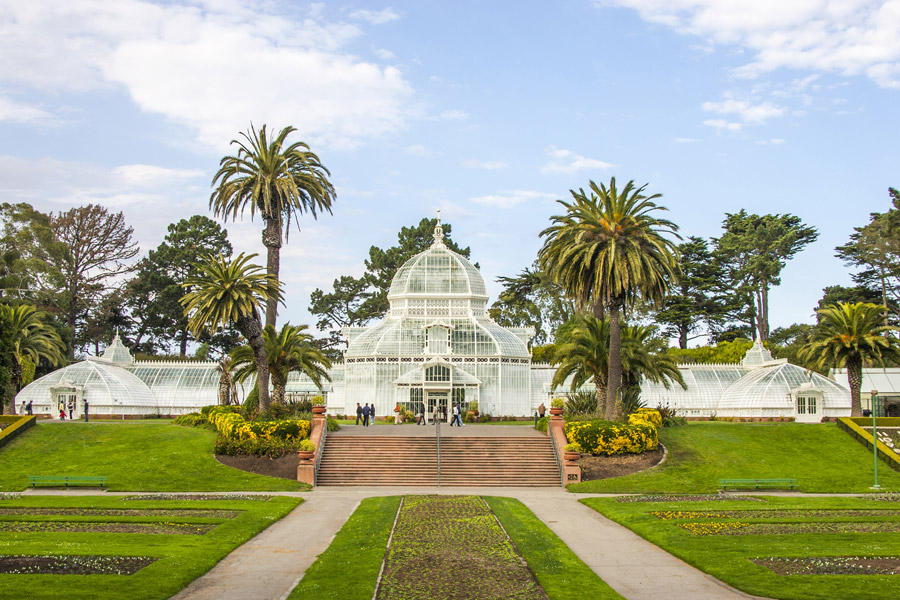 Golden Gate Park in San Francisco, California, is 20 percent larger than Central Park in Manhattan, New York. Approximately 25 million people visit it each year. Even so, many tourists are unaware of how much there is to do in the park. Most are pleasantly surprised at all they find when visiting.

Golden Gate Park celebrated its 150th anniversary in 2020, having opened to the public in 1870. Back then, the park consisted of 1,013 acres of windswept sand dunes located in the Outside Lands, an unincorporated peninsula. Today, the park contains 15 miles of drives, 33 acres of lakes, 130 acres of meadows, and 680 forested acres.

The first formal structure in Golden Gate Park was the Conservatory of Flowers that opened in 1879. Golden Gate Park is also home to the famous bridge erected in 1939 and the San Francisco Botanical Garden. The gardens contain more than 9,000 species of plants from around the world spread out across 55 acres.

When the devastating San Francisco earthquake hit in 1906, more than 200,000 people who had lost their home took temporary refuge in Golden Gate Park. The park also has the distinction of having the first children’s playground in the United States, the Koret Children’s Quarter and Carousel. Providing a dedicated space for children to play was a novel idea in 1888 when this section of the park opened.

San Francisco’s Golden Gate Park has added dozens of new attractions in its 151-year history. People visiting the park in 2021 and later will not want to miss the attractions described below.

Built in 1925 in Spanish Revival style, the original purpose of this building was to provide bathing facilities and a lounge for visitors. Most people who visited this area were swimmers at Ocean Beach. As a result, they welcomed the chance to relax and buy a snack post-swim. Although some indoor settings have changed, the building remains a visitor’s center with restaurants on the upper and lower levels.

The Academy of Sciences building is a combined rainforest, planetarium, aquarium, and museum of natural history all in one place. Visitors learn crucial lessons about biodiversity research, environmental education, and sustainability that they can use in their everyday lives.\

The de Young Museum is the oldest museum in San Francisco. However, it did not open to the public until 2005. Visitors will enjoy viewing art collections, architectural innovation, and a stunning natural landscape in a building designed by Herzog & de Meuron. The architectural firm won the Pritzker Award for the design.

Also known as the North Windmill, the larger-than-life Dutch Windmill stands 75 feet tall. The windmill is visible from a distance, but park visitors can also hike to get a closer view if desired. They first need to locate the Beach Chalet Visitor’s Center. After walking behind the building, park visitors will need to climb a steep hill and walk towards the Dutch Windmill to see it up close. Both perspectives are interesting, especially for amateur and professional photographers.

This Japanese-style tea garden is the oldest of its kind located within the United States. People involved with the 1894 California Midwinter International Exhibit developed the Japanese Tea Garden to pay tribute to traditional Japanese landscaping techniques. The modern-day tea garden located in Golden Gate Park contains 3.5 acres of manicured plants that staff have carefully chosen for their authenticity and diversity.

Developed by the City of San Francisco in 1896, McLaren Lodge was home to John McLaren, the fifth person to serve as park superintendent. John McLaren lived in these quarters until 1943 when he retired. McLaren Lodge is currently the Recreations and Parks Department Headquarters. People interested in architecture and history will want to stop here to admire the Richardson Romanesque design and intricate construction.

Golden Gate Park’s Music Concourse sits directly between the California Academy of Sciences and the de Young Museum. The concourse also owes its development to the Midwinter Fair in 1894. Hundreds of well-known and up-and-coming bands have played at the concourse in the nearly 130 years of its existence. The park hosts free concerts every Sunday from April through October.

Of course, don’t get confused by the similar naming between Golden Gate Park and the iconic Golden Gate Bridge. The Northern edge of the park is approximately 3 miles from the Southern end of the bridge. Visitors seeking the best views of the Golden Gate Bridge should take a self-guided walking tour of the Presidio instead.