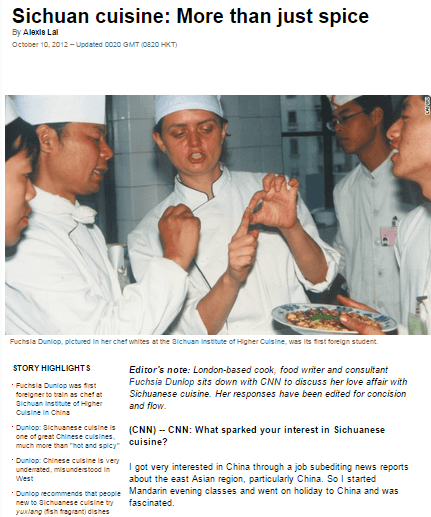 Sichuan cooking (a.k.a Szechuan and Szechwan) has enviably taken its place as one of China’s eight great cooking styles. The term comes from the Sichuan province in southwestern China, where the Sichuanese, even in ancient written accounts, were reported to “uphold good flavors”—flavors marked by hot and spicy. Its cuisine today, even around the world and in almost every Chinese restaurant in San Francisco , is characterized as having bold, sharp flavors with garlic, chili peppers and peppercorns, and the fragrant native Sichuan peppers playing up the dominant notes in its dishes. The complexity and pungency of Sichuan cuisine, however, are not without its pulsing, thrilling depth.

As food writer Andrew Coe knowingly writes: “The result is a cuisine with an incredible depth and complexity of flavor, hitting all sense receptors in your mouth, nose, and gastrointestinal system at the same time. You can tell a bad Sichuan restaurant because it hits one note at a time; dishes at a good Sichuan restaurant are a symphony.”

Even food components in Sichuan dishes that are pickled, salted, and dried, are made spicy with the liberal use of chili oil. The unique flavor of Sichuan pepper (pinyin or flower pepper) has a citrusy, fragrant flavor that prickles in the mouth, along with star anise, ginger, garlic, and chili peppers.

Food writer, Fuschia Dunlop, who went for chef training at Sichuan’s Institute for Higher Cuisine, points out that spicy Sichuan cuisine is not unlike French cooking in that there are different words for different processes of cooking. She identifies some of these techniques below:

For example, liu is taking your ingredient, which usually has some starch paste on it, and pre-cooking it in oil or water. Then you make a sauce and mix the two together.

Jian is what Westerners would call pan-frying in a flat pan, or frying without moving the ingredients around very much because you can also do it in a wok.

Chao means stir-frying. Chaoxiang is to fry fragrant, which is bringing out the fragrance of oil, ginger, or garlic.

Bian is another word similar to stir-fry. Ganbian, meaning dry bian, is frying without any oil and later adding oil and seasonings.

Qiang is frying Sichuan pepper and chili and then adding an ingredient to drive in the Sichaun spice.

Sichuan’s capital city, Chengdu—the birthplace of many culinary traditions—was the first city in Asia to be designated the “City of Gastronomy” by UNESCO. The city, in fact, has become one of the most exciting food centers in the world. Sichuan cuisine, indeed, finds its way in any authentic and vibrant Chinese restaurant in San Francisco , such as the Chili House SF, and with every one of them never losing the beat of ten blended flavor notes—spicy, sour and hot, home-style, gingered, sweet and sour, and garlicky, among others—which has earned authentic Sichuan-styled food its well-deserved world reputation for great-style cooking.