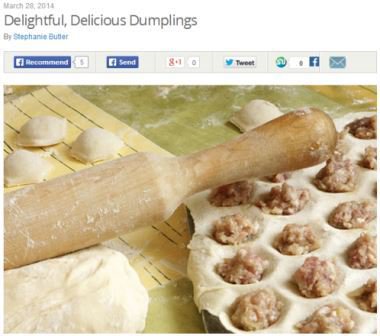 If you eat at a typical Chinese restaurant in San Francisco or elsewhere, you’re likely to find dumplings in the menu. The history of Chinese dumplings is a rich and fascinating one. These tasty, cooked balls of dough, usually filled with meat or any other relish, are pretty popular around the world, and it’s not hard to see why. History Channel writer Stephanie Butler agrees:

From Italian ravioli, to Polish piroshky, to Chinese pot stickers, the humble dumpling is beloved by eaters around the world. Truly a universal food, you’d be hard pressed to find a cultural cuisine that doesn’t include dumplings in some form, be it stuffed or boiled.

But have you ever wondered about dumpling history? When and how did people first come up with dumplings? Dumplings are ancient by culinary standards, and the history behind them goes way back. Archaeological evidence points to dumpling-like recipes from Ancient Rome, but the true origin history of the dumpling as we know it today begins with the ancient Chinese. The treat’s inception was attributed to China’s so-called “Medicine Saint,” Zhang Zhongjing.

Zhang lived 1,800 years ago during the Eastern Han Dynasty. One day, he returned to his hometown after retiring from government service. It was winter when he came home, and upon arriving, he noticed that a lot of the people had frostbitten ears. As a healer, he soon realized that his home clinic would be filled beyond capacity with aching townspeople any moment. Because of this, he asked his brother to put up a tent in the town square, and place a heated cauldron inside.

Zhang crafted a cure by wrapping mutton, chili, and some medicinal herbs in a dough skin, shaped like an ear. This was boiled in water before being given to the people. Zhang’s cure helped warm the patients’ bodies effectively, and also thawed the frostbitten ears by promoting blood flow. Incidentally, the cure also tasted so good that it was well-received. For the next several days, Zhang had his fellow townspeople continued eating his recipe and consuming the soup made from its broth, and it was only a matter of time before the people’s frostbitten ears were cured.

Not many people would have thought that the tasty treat was originally crafted for medicinal purposes, but dumplings have withstood the test of time, still warming the hearts and tummies of people today eating in their preferred Chinese restaurant around San Francisco , like Chili House. For what it’s worth, foodies around the world have Zhang Zhongjing to thank.

Enjoy the best dumplings in San Francisco at Chili House as part of a tradition going back many centuries.