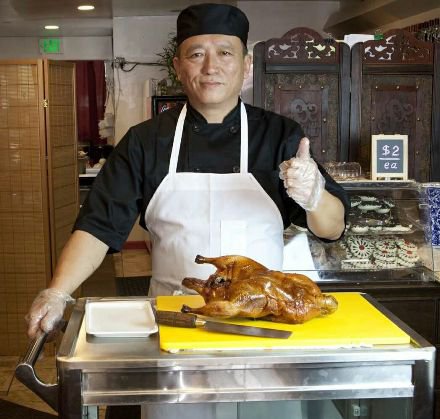 20 Jul The History Of Peking Duck – An Authentic Delicacy

Posted at 07:49h in General, Uncategorized by Admin 0 Comments
6 Likes

One of the most wonderful and fascinating aspects of the culinary arts is the history behind each and every dish we enjoy. From the four course meals at Michelin Star-rated restaurants to the every day comfort food whipped up at the neighborhood “greasy spoon”, every dish has a unique story. The same can be said for traditional Chinese dishes, whose origins are as vibrant as the flavors they are known for. Today we are going to look at a staple of Chinese cuisine (as well as a staple of our menu!), the history of Peking Duck.

The earliest incarnation of the dish dates back to the early 14 th century. Hu Sihui, the official dietitian for the emperor and rest of the royal court during the Yuan Dynasty, included the recipe in his highly influential book Yinshan Zhengyao (Important Principles of Food and Drink) , which to this day remains a pillar of both Chinese medicine and cuisine. At this time recipes like these were considered highly guarded secrets, being perfected and reserved for only the highest members of royalty.

The fall of the Yuan Dynasty in 1368 brought about many changes in China and paved way for the rise of the Ming Dynasty. By this time, the recipe took on the name “Peking Duck” , named for the capitol city in China (no more commonly referred to as Beijing). The dishes association with nobility continued, becoming a regular feature on imperial court menus. It was last during this time that Bianyifang, the first and oldest restaurant specializing in Peking Duck, was established the Qianmen area of Beijing.

Popularity only grew as time went on, and it was during the Qing Dynasty that Peking Duck became world renowned. During this period of time that the upper class populous began enjoying the dish along with members of royalty. In fact, the dish became so popular that it began to be mentioned in the works of poets and scholars. It was also during this time that saw the establishment of Quanjude in 1864, a world renowned restaurant still operating to this day well known for perfecting the hung-in-the-oven roasting technique.

As a result of the dishes prominence over hundreds of years, Peking Duck became a must-try for world leaders and dignitaries looking for a slice of authentic Chinese culture. In fact, Quanjude has hosted and served notable figures such as George H. W. Bush, Fidel Castro, Yasser Arafat, and Kim Jong Il. Legend has it that Quanjude’s Peking Duck playing a significant role in the normalization of relations between the US and China in the 1970’s.

During a secret visit to the country in 1971, National Security Advisor Henry Kissinger and his advisory team dined on a 12-course lunch at Quanjude that featured Peking Duck. Impressed by the dish and the hospitality received during the lunch (It is said that then-Chinese premier Zhou En-lai personally showed Kissinger how to wrap a Chinese crepe around the duck), Kissinger and his team were put at ease during the trip. The very next year President Nixon personally flew to China to formally normalize the countries’ relationship, marking the first time a sitting president visited the People’s Republic of China and ending 25 years of separation between the countries.

Peking Duck is the quintessential Chinese dish, and should tried by any and every budding foodie looking to explore authentic Chinese cuisine. For the absolute best Peking Duck in the Bay Area, look no further than Chili House!