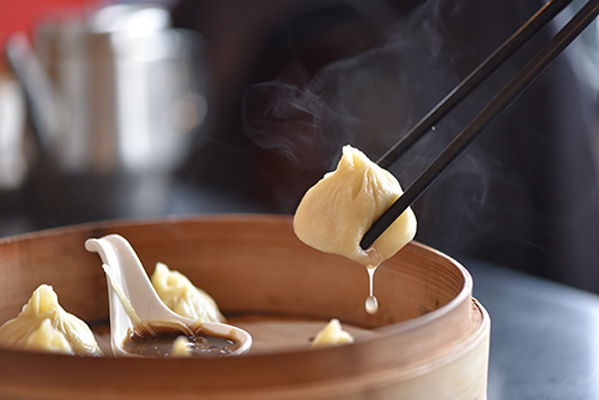 Posted at 14:12h in Info Articles by Admin 0 Comments
0 Likes

Xiao Long Bao, casually known as XLB, is a much-loved Chinese cuisine known for its delicate wrapping and flavorful soup filling with a powerful aroma. As famous as Xiao Long Bao is today, it comes from humble beginnings. Its creator, Huang Mingxian, was the owner of a restaurant called Ri Hua Xuan. It was while working here that he created Xiao Long Bao in the 1870s. It happened somewhat by accident as he added aspic to minced pork and then steamed it. Mingxian quickly noticed that the aspic turned liquid and the dumpling filled with soup.

After tasting Xiao Long Baoand realizing it was delicious, Mingxian knew that others in his village would enjoy it as well. He came up with the name Nanxiang da rou mantou, which means large bun filled with meat. He reasoned that the petite size of the soup dumplings would surprise diners and create a memorable experience for them, which turned out to be true.

Although customers came to Ri Hua Xuan in droves to taste what is now known as Xiao Long Bao, they weren’t crazy about the name that Mingxian assigned it at the time. They took to calling it by a name that they felt better described its appearance and origination. That name was Nanxiang xiaolongbao. The first part of the name described the region where the memorable dish originated from while xiao meant small, long meant basket, and bao meant bun. Over the years, people separated the words and then eventually begin referring to it as XLB.

Another Version On The Origins XLB

While most Chinese credit Huang Mingxian with creating the delicious dumpling dish, some hold to an alternative theory. The alternate origin is that Emperor Qianlong actually brought Xiao Long Bao to prominence.

The emperor, whose life spanned from 1711 to 1789, travelled through the Wuxi, Jiangsu province in the mid-1700s. During this time, he tasted the dumpling for the first time. People of the region called Emperor Qianlong the Swimming Dragon. This translates to “Youlong” in Chinese, because he typically traveled along the river.

The Emperor’s ringing endorsement of the new dumplings made it famous throughout the region. In fact, some people believed that the word long in Xiao Long Bao should be replaced with dragon instead of standing for basket. Even so, the XLB moniker has stood the test of time for at least two centuries.

When a person bites into a soup dumpling for the first time, he or she often expresses a sense of wonder at their pure deliciousness of it. They quickly learn how to carefully open the dumpling and extract the juice without burning their mouths.

Although served primarily as an appetizer, people often want more XLB once they’ve had their first bite. Regardless of which origin story of Xiao Long Bao is true, people continue to enjoy this culinary delight. Centuries later, its popularity continues to grow outside of China.