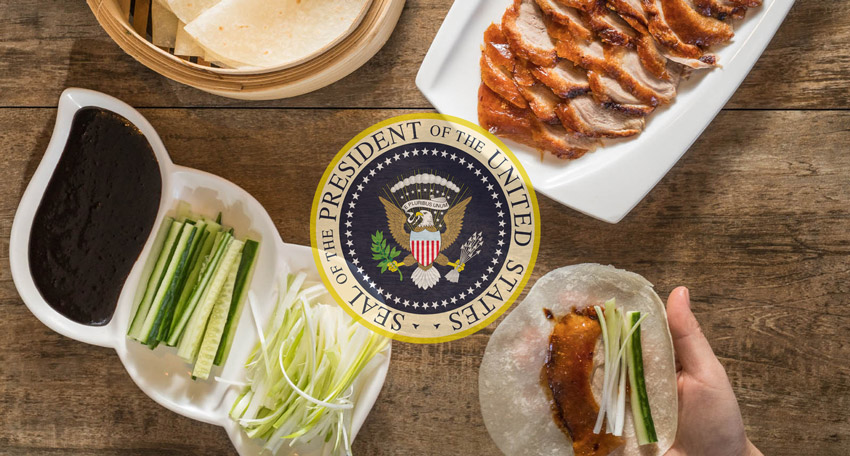 Peking duck has long been a popular and revered dish in China. Chefs create this famous dish by allowing a duck to hang overnight and then pumping air under its skin. This helps to pull the fat out more during the roasting process, which results in extremely crispy skin on the outside and warm tender meat on the inside.

Another reason the dish is so delicious is that chefs coat it in spices and sweet syrup after taking it down from its hanging position. From there, the Peking duck goes immediately into an oven containing fruit wood.

After removing the Peking duck from the oven, chefs immediately bring it to the diners’ table to carve in front of them. They then serve the skin with small pieces of meat still attached along with small flour pancakes, scallions, and hoisin sauce. The remaining duck meat goes into a stir-fry and the carcass creates a duck broth soup.

In 1972, President Richard Nixon visited China hoping to improve a strained diplomatic relationship between the two countries. Back at home, Americans watched a nightly review of Nixon’s speeches on television.

While American’s paid close attention to the political discussions, many grew equally interested in what he ate while in China. Nixon played the part of the Chinese guest well, sitting down nightly to huge feasts served with potent baijiu liquor.

The United States had many Chinese restaurants prior to President Nixon’s 1972 visit. However, the chefs traditionally served a highly Americanized version of Chinese food catered to the palates of Westerners.

Due to the intense media coverage of Nixon’s trip and its focus on what he ate while in China, Americans began to emulate his eating habits. This led to an increase in using traditional Chinese ingredients, eating with chopsticks, and more.

Of all the dishes brought to the attention of American viewers, Peking Duck perhaps generated the most interest. As Atlas Obscura noted in an article on Nixon’s visit and the culinary impact:

The publicity led to a Chinese restaurant boom. In a New York Times article describing the phenomenon, the paper listed “the more exotic Chinese cuisines” that Americans could now try, including moo shu pork, sweet-and-sour fish, and, of course, Peking duck. One Chinese-American restaurateur said that when her restaurant first opened, she “couldn’t give away a Peking duck.” Nixon, she added, was “the greatest salesman for Peking duck. Now many people want it.”

George H.W. Bush occupied the office of vice president for eight years from 1980 to 1988 and then president from 1988 to 1992. During that time, he visited a 300-seat Asian restaurant called Peking Gourmet Inn in Falls Church, Virginia more than 50 times. Peking duck was his absolute favorite thing on the menu. He loved it so much, in fact, that he rarely looked at a menu and the staff already knew just what he wanted.

The entire Bush family became regulars and then friends of owner George Tsui and his co-owner brother. It seemed only natural, then, that George H.W. and Barbara Bush invited Tsui and his staff to the Bushes home in Houston to help cater their 50th wedding anniversary celebration on January 6, 1995.

The love for authentic Chinese food started with Nixon and extended to Bush and later his son George W. Bush, who was President of the United States from 2000 to 2008. Today, people across the country enjoy Peking duck and other Asian delicacies thanks to the notoriety these dishes gained from American presidents.